There are many iconic images of the American west. Deserts with rocky outcrops and canyons, cowboy towns such as the O.K. Corral, chaps, the famous six-shooter, etc… We really could go on forever, but nothing is more iconic than a cowboy hat. The history of cowboy hats isn’t hard to nail down. It begun in the American west and is still alive and gaining popularity today.

A high-crowned, wide-brimmed hat best known worn by a North American cowboy, today you can find many people not only in America, but in many places around the world wearing the iconic hat. More traditionally worn by ranch workers here in the United States, it also has popularity in western Canada and Mexico and we as the South Eastern United States.

The cowboy hat can attribute its famous style and design to such hats as the sombrero or wide brimmed hats worn by farmers in the eastern United States. We also can’t forget some designs and styles that were incorporated by the United States Cavalry.

The Design Of The Cowboy Hat

Modern cowboy hats are made of either felt, straw or leather, though you see them mainly in felt or straw. They have a tall rounded crown and a wide flat brim that encircles the rounded crown. Inside is a simple sweat band that yeah, you guessed it absorbs sweat but also functions to stabilize the fit of the hat to your head. On the outside of a cowboy hat, you can usually find a decorative band that has become very popular as the hat has progressed through time.

Hats are easily customized by the decorative band on the outside of the hat and by also creasing the crown of the hat and rolling the brim. The brim is usually slightly rolled on the sides which give it a very familiar shape that we all know and also can be rolled down in the back which was originally used to keep sun off the back of your neck. Another way to customize your hat are to attach what are called “stampede strings” or “wind strings” to your cowboy hat.

Cowboy hats can come in virtually any color with beige, brown and black being the most popular. Pastel colors were introduced in the 1940s and were often seen on movie cowboys and rodeo riders. Besides the color changes and hat bands, cowboy hats have remained virtually unchanged since J.B. Stetson created the first cowboy hat in 1865.

Some Interesting Facts On The Modern Design Of Cowboy Hats

Any ornamentation such as bows, buckles, etc… are attached on the left side of your cowboy hat. This had a practical purpose of course. Since the majority of people are right-handed, this was done so it would not interfere with the use of weapons if your cowboy hat did not have a wide brim. I really can’t picture this in my head very well lol, but that’s the history of it. It makes me wonder if it’s alright to switch this if you are left-handed? I bet most people don’t know the reason for this, so everyone just instinctively puts these things on the left-hand side.

The memorial bow in side of your cowboy hat, what’s it for? Good question, I’ve actually never thought about it until now. That bow represents past wearers of cowboy hats who developed brain damage from treating felt used in the making of their cowboy hat with toxic mercury. This is where the saying “Mad as a hatter” or “Mad hatter” came from. The bow on the inside hat band resembles……………..you guessed it, a skull and crossbones. Early hat makers (known as “hatters”) used mercury to treat the felt hats they made and after years of this practice, they got mercury poisoning. People attributed this to “madness” and had no idea about mercury poisoning. That is crazy!

The “wild west” was greatly popularized in movies by famous people such as Buffalo Bill and of course John Wayne. One of the more famous designs “The Boss of the Plains” influenced various wide-brimmed hats worn by farmers and ranchers alike all over the U.S. Later designs were adopted and customized for military, law enforcement, and of course Hollywood motion pictures.

Do you know what law enforcement agency was first to adopt Stetson’s western hat as part of their uniform? Yeah, it’s an easy one. The Texas Rangers of course. A Stetson based design is also part of the very well-known and iconic ceremonial uniform of the Royal Canadian Mounted Police.

As I stated earlier, creases in hats are used to give cowboy hats a personal look to the wearer. Because of the ease of personalization, it was often possible to tell where a cowboy hat was from, right down to which ranch, simply by looking at the crease in the crown. Creases today make it easier to remove the hat making it easier to grab by the crown instead of the brim of the hat. Some of the most popular styles of creases today are the Cattlemen, the Carlsbad crease or “Gus crease” from the movie Lonesome Dove, the rodeo crease, the quarter horse crease, and the “tycoon”.

Ever heard of the “ten-gallon” hat? This term for a certain type of cowboy hat came around in the middle 1920s. Unfortunately there are many theories on how the term came to be. One theory is that the term “ten-gallon” is a corruption of the Spanish modifier tan galán, which loosely translates as “really handsome” or “so fine”. For example, “un sombrero tan galán” translates as “such a fine hat”. Another theory is that the tight weave of a Stetson allowed it to hold water like a bucket. This was true, but definitely could not hold 10 gallons but could only hold 3 quarts. You definitely would not want to use your modern day cowboy hat as a bucket though.

The Cowboy Hat – If It’s Not Broke, Don’t Fix It

If you think about it, the cowboy hat you see today isn’t much different from the hats you see in old westerns or westerns from yester year. Sorry, I had to use that term. Not many situations in life that allow you to use it properly, so I went ahead and took it! But what I said in the title “If it’s not broke, do’t fix it” definitely stands true. It doesn’t matter if you are working on the ranch wearing your cowboy hat to keep the sun out of your eyes and off the back of your neck or wearing it on stage in front of 30,000 screaming fans. The cowboy hat served a purpose 100 years ago and serves a purpose today and it does it very well.

If you want to check out some great cowboy hats, head over to Pinto Ranch or Hat Country and I’m sure you will find something you absolutely love. If you have any comments or questions, be sure to let us know below and we will get right back to you!

Thanks for checking us out and we hope you find your favorite cowboy hat today! 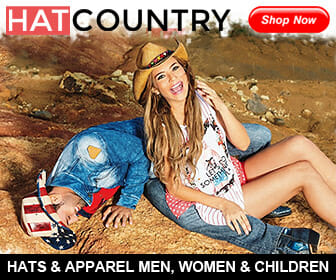