Well, It’s time to go a little TMZ on y’all! The title of this article is “Celebrities Wearing Boots”, but it’s mainly about them wearing cowboy boots. To be perfectly honest, I hate talking about celebrities. They drive me crazy. Pushing their political views, talking about how difficult it was to film a movie while they are making millions of dollars, etc… etc…. But there is no getting away from them. They are all over the place either promoting a product or service in t.v. commercials or just being seen on shows like I mentioned above or even your favorite talk show. They are on the big screen, they are on television, they are in music videos, magazines, billboards, you name it, they are everywhere. Whether it’s promoting a product in a t.v. commercial or being critiqued on TMZ for whatever new style of the week they are wearing while walking down the red carpet, their influence is definitely felt in the fashion world and everyday life of you and me.

Are You Buying It?

You might say no, but most likely you are. I mean, it’s practically impossible not to. Remember what I said above, celebrities are everywhere. You are basically being bombarded every day with hundreds of products. Some by celebrities, some by just plain old advertising. But at some point, I’m sure you saw something that a celebrity was using or wearing and you decided you had to have it.

I’m sure when you were say 10 years old, it was definitely more likely that you would want something because a celebrity was using it. Heck, you were just a kid and movie stars or sports stars were like gods! I mean I would see Mean Joe Greene from the Pittsburgh Steelers drinking a Coca Cola in that famous commercial and you bet I wanted a Coke! I’m sure there were many other instances where I would either want a certain shirt, pair of shoes, etc…. You get the point.

Has anything really changed? Judging by commercials, magazine ads, radio commercials, etc… I don’t think so. There’s a reason celebrities are being paid big money to do these ads or to wear these items, people are buying the stuff up! So before you say “No”, you might want to have a look around your house or a look in your closet and think about your answer again.

So, Let’s Talk About Who’s Wearing The Boots And Why 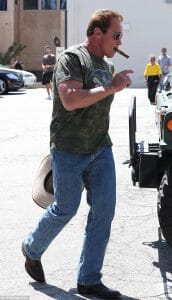 Who’s wearing the boots? Well, in my opinion, it’s just about everybody. every type of celebrity that you can imagine has been photographed in the last couple of years wearing boots. Why are they wearing them? I’m sure there are several reasons, it just depends on who it is. It’s usually one extreme to another. I mean, if you see an awards show, say the Country Music Awards, and someone like Garth Brooks or Luke Bryan (for you millennial country fans) is on there wearing a killer pair of cowboy boots with jeans, that is to be expected. I could totally see myself looking at those boots and saying “Oh yeah, I would love to have a pair of those!”. On the other hand, if I’m flipping through the channels and happen to stumble upon one of those Hollywood gossip shows (cough) and for some reason actually sit there and watch it for a second (most likely the batteries in my remote just died) and I see Justin Bieber (I had to look up the spelling) wearing a pair of cowboy boots. Maybe even a rock star wearing a pair. There’s pretty much zero chance I will want those boots. I don’t care how spectacular they might be.

There are two things that I take away from this. It obviously matters which celebrity is wearing the boots, and it also matters on your personality. In this case, my personality. I could see the country star wearing a pair of casual jeans and normal shirt (something that I would wear), and that look would be more appealing to me because it fits my personality. The Bieb’s, or even a rock star wearing a pair, well that’s celebrities wearing boots I really don’t have any interest in seeing. I guess I’m pretty “vanilla”, but that’s just me. You might have a completely different outlook about it. If so, let me know in the comments below. I love hearing another point of view.

Do They Really Want To Be Wearing Boots?

Now that I come to think about it, I may have been a little hard on Justin Bieber. If he 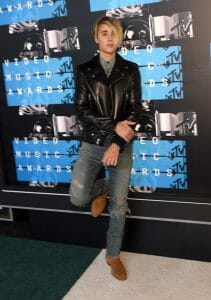 wasn’t acting like a tool and wearing a normal pair of pants and shirt, who knows, I may just look at the boots and not judge. Maybe it could happen, maybe not. I just think if I saw him wearing a pair or seeing someone like a rock star wearing a pair, I don’t think they would be wearing them because they wanted to, I think it would be for the attention. You know a ton of these stars are attention hounds. They will do anything to get in the spotlight or to get people talking about them. That to me is a big turnoff. Now seeing someone like Carrie Underwood, Reba McEntire, Garth, or Luke Bryan wearing them has a complete and total different reaction from me. These are the types of celebrities wearing boots that definitely would have a bigger influence on me. Once again, beside who the stars are, my personality has a big influence in my decision. I’m not one that likes a lot of attention, so you will usually find me in a pair of Roper boots, but  Maybe you do. Maybe you like being the focal point of attention. There’s nothing wrong with this. I’m sure your personality is going to dictate a different reaction when seeing different celebrities wearing boots.

Let’s Wrap It Up 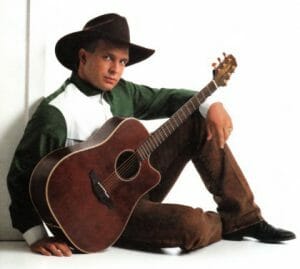 So basically what it comes down to is diversity. Diversity in the type of stars you are watching and with each star, it also depends on the diversity of the actual viewer. Let’s use Garth Brooks as an example again. You could definitely imagine someone like Garth Brooks wearing cowboy boots and if you were say your typical average country boy, this would definitely appeal to you. On the other hand, you might have a punk rock type of dude and he sees Garth Brooks wearing cowboy boots. Not your typical match, but hey, this punk rocker is more of the “look what I’m wearing” type of dude. Him wearing a pair of short cowboy boots might be exactly what he wants to project. This is something that will definitely get him some attention.

With all of this information, you’re gonna have to admit that you have probably succumbed to buying boots or thought of buying boots because you saw some celebrities wearing boots on an awards show or somewhere else. For whatever it’s worth, you should just do what you want to do. Nobody here is going to critique your fashion decisions (unless your famous). When you come to think about it, there’s nothing wrong with wanting something you see a celebrity wearing. I mean they usually have some pretty good fashion sense and besides, you know everyone does it. I’m sure celebrities do it also, but that’s a whole other cup of worms and I really don’t want to go there.  If you do have a pair of boots, make sure you keep them looking good.  You can find what you need on our “Boot Stuff” page.

Let us know what you think about this in the comments below. We would love to hear from you!